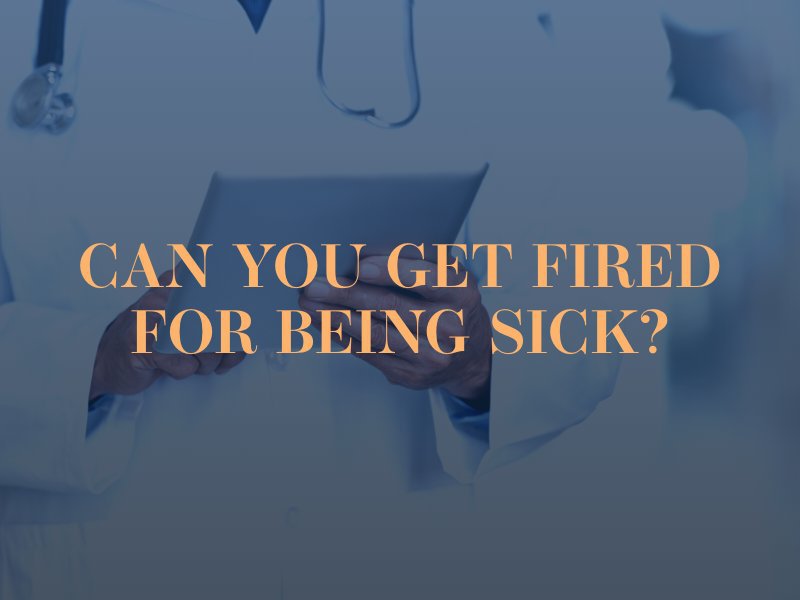 In New York, the New York State Human Rights Law and the New York City Human Rights Law may protect employees from being fired for being sick (again, only if the sickness constitutes a disability under the law). Some jurisdictions have laws that are much more employee-friendly than others.

If you’ve been sick too many times, there may be a point where your sickness becomes a disability.

The Americans with Disabilities Act (“ADA”) is a federal statute that protects against disabilities in the workplace.

The definition of “disability” states three ways in which an employee may become disabled:

The most common reason to claim a disability is that the condition “substantially limits a major life activity.” This is a fair high bar. Things like depression, cerebral palsy, and Tourettes typically are covered disabilities.

Sickness is normally not covered. But it’s possible that you have a disability that is causing your sickness.

If you do, it might be worth evaluating this with your doctor or lawyer. And disclosing it to your employer.

Even if disclose your disability and you don’t have a disability, it’s not likely that your employer will fire you. People with disabilities are job-protected. Even if there is a possibility that you are disabled, employers will likely not fire you simply for disclosing it.

Most employers want to avoid lawsuits. And firing someone who is claiming a disability is a sure-fire way to incur one.

But, you never know what your employer will do, so always use caution. This is a personal decision.

You should, however, first get some information on whether your sickness is coming from a recognized disability.

If your employer accepts your disability, you can request reasonable accommodations. These would be things like intermittent leave and the ability to modify your work schedule.

The definition of a disability differs under state and federal laws. Specifically, as Mr. Weinstein explained, under federal law, a disability is defined as a mental or physical impairment that significantly impairs one or more major life activities. The definition of a disability under New York law is much broader, and it includes any mental, physical, or medical impairment that prevents the exercise of a normal bodily function. Thus, under New York state law, an employee does not need to show that his or her disability impairs a major life activity. Furthermore, as Mr. Weinstein noted, New York City provides even greater protections to employees, defining a disability as any actual or perceived mental, medical, physical, or psychological impairment. If an employee is designated as disabled under local, state, or federal law, an employer can face legal action for firing the employee.

Mr. Weinstein noted that New York, like most states, is an at-will employment state, which means that an employee can be terminated for any reason, as long as the reason is legal. Sickness typically qualifies as a legitimate reason to fire an employee. As explained by Mr. Weinstein, however, discrimination may arise when a “sickness” constitutes a disability.

There are several elements that come into play when a jury assesses a plaintiff’s damages in a disability discrimination case, such as the length of time during which the employee was out of work following the termination, whether the employee was promised any bonuses before he or she was terminated, and the emotional and psychological impact of the termination.

As explained by Mr. Weinstein, under the FMLA, eligible employees are permitted to take up to 12 weeks of unpaid, protected sick leave. Employees are only granted leave under the FMLA for serious medical conditions, however, such as cancer, diabetes, and mental illnesses. Generally, the FMLA obligates an employer to hold the employees position open throughout the duration of the leave and prohibits employers from firing employees solely for taking FMLA leave.

Mr. Weinstein cautioned, however, that an employer can only be held liable for firing a sick employee if the employee’s sickness constitutes a disability. Disabled employees are protected from being fired due to their disability by the Americans with Disabilities Act (ADA) and the Family and Medical Leave Act (FMLA), both of which are federal laws. Additionally, the New York State Human Rights Law and the New York City Human Rights Law provide protections for disabled employees in New York State and New York City, respectively.

Job Protection Under the Americans with Disabilities Act

If you are taking sick time for a condition that qualifies as a disability under the Americans with Disabilities Act (ADA), you may also be protected from termination.

The ADA is a federal law that prohibits employers from discriminating against employees with disabilities: physical or mental impairments that substantially limit a major life activity or major bodily function. (For more information on whom the ADA protects and what counts as a disability, see Americans with Disabilities Act FAQ.)

Although the ADA doesnt explicitly grant employees the right to take time off, it does require employers to make reasonable accommodations to allow employees with disabilities to do their jobs.

One such accommodation might be time off work, depending on the circumstances. Employers arent required to provide a reasonable accommodation that would create an undue hardship: significant difficulty or expense for the employer, considering its size and resources.

Some courts have found that an employee who needs a significant amount of time off work isnt qualified for the job — and, therefore, isnt entitled to the protections of the ADA.

However, if your employer routinely provides leave for other purposes, you dont need much time off, or for some other reason your leave wouldnt pose an undue hardship on the employer, you may be protected by the ADA.

Can I get fired for being too sick?

Can I get fired for calling in sick once?

“If you’re working in a state with at-will employees, they can fire you for anything that’s not illegal,” Augustine says. That means that unless you qualify for legal protections under FMLA or the Americans with Disabilities Act, there is nothing stopping an employer from firing you for calling in sick.

Can I be punished for calling in sick?

The short answer to this question is “No.” An employer may not discipline you for taking, or asking to take, accrued paid sick leave.

How many times can you call in sick before you get fired?