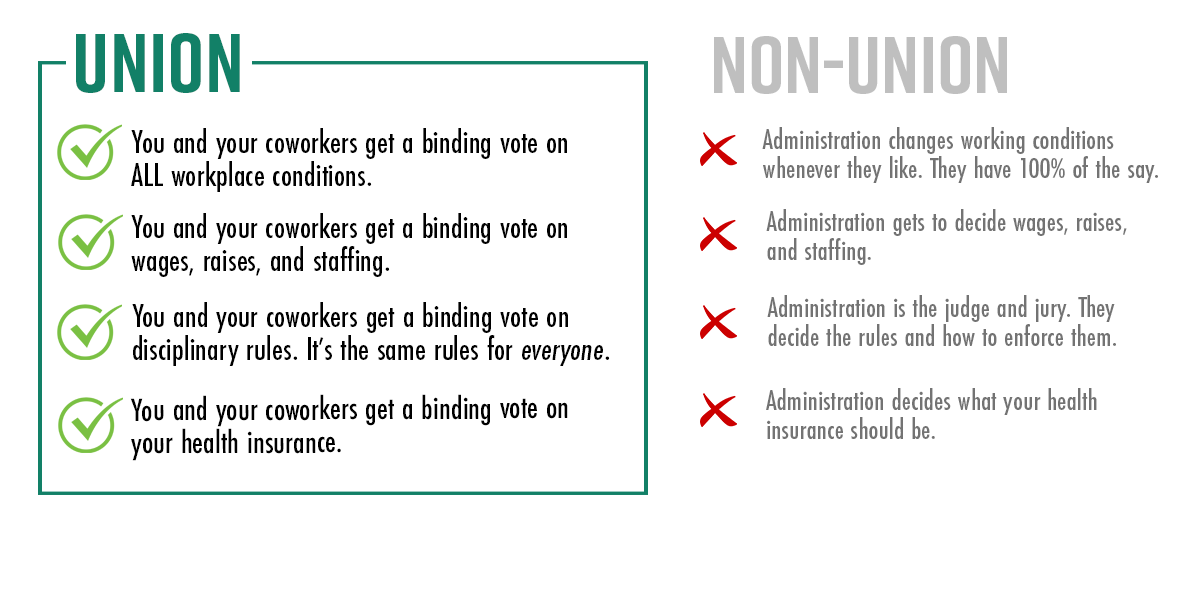 Unions have been around for decades, with many still in place today. Their role is to help protect employee rights, ensure equal pay, and address trending workplace issues.

Historically, corporations and unions have had a contentious relationship. Many TV shows focus on this part of the relationship, which can paint a picture in your head that joining a union could be detrimental to your career, and even leave you wondering, âCan you be fired for unionizing?â Another question that may come to mind is whether your boss can legally fire you for talking with union organizers or attempting to join or assist a union? The simple answer is no. As a matter of fact, your company canât even legally fire you for organizing a union. Does this mean you wonât get fired for participating in union activities? Once again, the simple answer is no.

Under federal law, you have the right to form, join, or assist a union, and cannot be fired for engaging in unionizing activities. However, there may be some situations where your employer may terminate your employment, such as if you are speaking about unionizing during work hours.

You have the right to form, join or assist a union.

You have the right to organize a union to negotiate with your employer over your terms and conditions of employment. This includes your right to distribute union literature, wear union buttons t-shirts, or other insignia (except in unusual “special circumstances”), solicit coworkers to sign union authorization cards, and discuss the union with coworkers. Supervisors and managers cannot spy on you (or make it appear that they are doing so), coercively question you, threaten you or bribe you regarding your union activity or the union activities of your co-workers. You cant be fired, disciplined, demoted, or penalized in any way for engaging in these activities.

Working time is for work, so your employer may maintain and enforce non-discriminatory rules limiting solicitation and distribution, except that your employer cannot prohibit you from talking about or soliciting for a union during non-work time, such as before or after work or during break times; or from distributing union literature during non-work time, in non-work areas, such as parking lots or break rooms. Also, restrictions on your efforts to communicate with co-workers cannot be discriminatory. For example, your employer cannot prohibit you from talking about the union during working time if it permits you to talk about other non-work-related matters during working time.

Forming a union at a non-union workplace

The National Labor Relations Act protects the right of employees to form or join a union or refrain from doing so. To protect this right, the NLRB conducts secret-ballot elections among employees to determine whether they wish to be represented by a union. If a union receives a majority of the votes cast in an election, it is certified as the employees’ bargaining representative and must be recognized by the employer as the exclusive bargaining agent for the employees in the relevant workgroup. Failure to bargain with the union at this point is an unfair labor practice.

To start the process, you must file an election petition with your local NLRB office. Along with the petition, you will need to show that at least 30% of the employees support your election petition, which is usually done with authorization cards or a petition signed by your co-workers. An NLRB agent will then make sure that an election in your particular workgroup is appropriate and take steps to set the time, date, and place of a secret-ballot election. Elections may be in-person, by mail, or a combination of both. If the union receives a majority of the votes cast at the election, the NLRB will certify the union as your exclusive collective-bargaining representative. 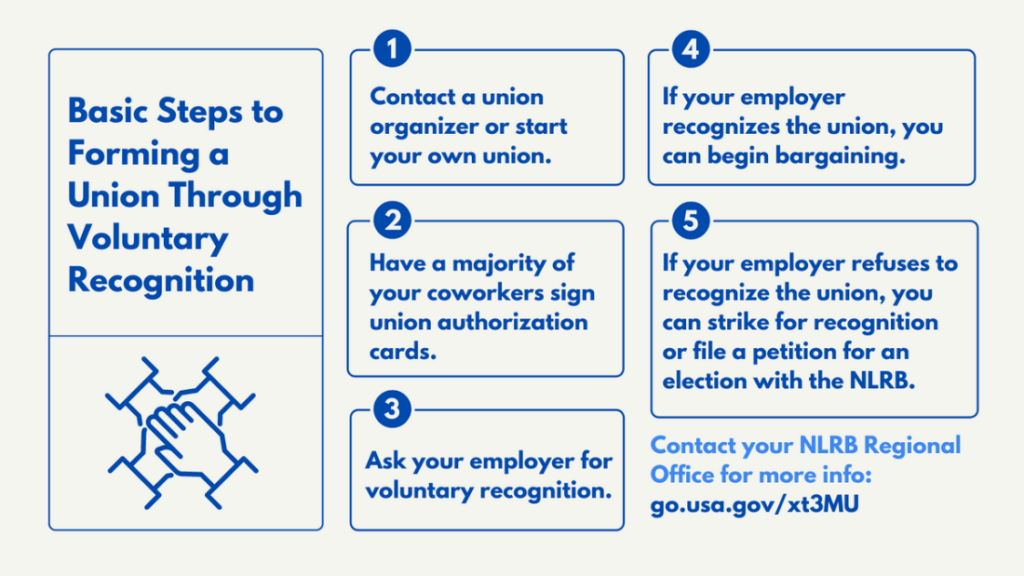 No matter what the industry you are in, or the labor law that covers it, the process for forming a union is similar.

When you and your co-workers come together to form a union, you get the right to negotiate with your employer over wages, benefits and working conditions.

Once your union is official, you’ll choose your leaders and negotiate a contract. The process is democratic, and the more inclusive you can be, the stronger your union will be.

How to Unionize a Workplace Organize

Can you be fired for attempting to unionize?

Supervisors and managers cannot spy on you (or make it appear that they are doing so), coercively question you, threaten you or bribe you regarding your union activity or the union activities of your co-workers. You can’t be fired, disciplined, demoted, or penalized in any way for engaging in these activities.

Do unions prevent you from getting fired?

Since non-union workers are typically hired “at will” and without a union contract behind them, they can be fired for no particular reason. Workers with union jobs can only be terminated for “just cause,” and the misconduct must be serious enough to merit such action.

Can a company fire everyone if they unionize?

Under the law, employers are not allowed to discriminate against or fire workers for choosing to join a union. For example, it’s illegal for employers to threaten to shut down their businesses or to fire employees or take away benefits if workers form a union.

How do I unionize my workplace?

How To Start a Union At Your Workplace in 7 Steps