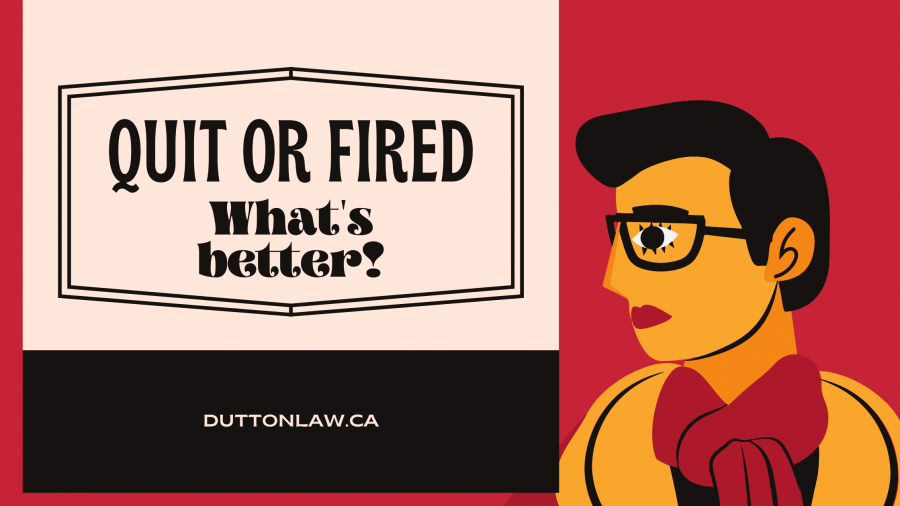 No matter how long you’ve been in the workforce, you’ve likely experienced a moment of unhappiness with a job. In extreme cases, it reaches the point where you want to get out and move on to another employment opportunity.

You might be wondering if it’s better to quit or get fired. Quitting might be appealing if you want to avoid any damage to your reputation as an employee that comes with termination. Despite this common belief, there are times when resigning before you’re formally fired may not be the best option.

Whatever the circumstances, you should consider the consequences of one versus the other. This article explores how quitting or getting fired could impact your lifestyle and career, both present and future.

Resigning from a job has some advantages worth considering. One of the biggest perks is that it looks better on your resume than being fired. If you voluntarily leave a job, you tend to have greater control over your narrative. You can showcase your departure in a more positive light to prospective employers.

In his new book Fired!: Protect Your Rights & Fight Back if You‘re Terminated, Laid Off, Downsized, Restructured, Forced to Resign or Quit, New York City attorney Steven Mitchell Sack offers some important advice if you are considering resigning from a job. “Never quit; make the company fire you,” says Sack. This is because you may put yourself in a much worse position,legally speaking, if you voluntarily resign instead of being fired. Here are five reasons why it may be better to be terminated by your employer rather than quit:

Not Sure If You Should Resign? Answer These Questions:

If you’re a younger worker, you probably have less money saved and more likely to need to collect unemployment benefits, which are typically available only to those who are terminated. That’s a good argument for hanging onto your job for as long as you can rather than jumping ship and starting from scratch.

Additionally, the received wisdom has traditionally been that you shouldn’t leave a job before two years, otherwise potential employers will think you’re a flight risk. (Not that that’s dissuaded job hopping among younger generations, beginning with millennials.)

Getting your very first pink slip could even be seen as a rite of passage, not that its anything to be welcomed. But the fact is, most people feel that being shown the exit at least once in your career comes with the territory.

If you’re higher up on the career ladder, you may have some leverage that you can take advantage of. Many employers know that if they have a senior person leaving, there’s a risk of greater implications to the company.

Therefore, those at the management level and above may be able to resign with a severance package of six months or longer in exchange for, say, agreeing not to bad-mouth the company or work for a competitor for a mutually agreed upon length of time.

Is your mental health at stake?

So your situation is bad. Awful, even. Deciding whether or not to resign from a job has a lot to do with listening to yourself.

Assess how much toll your miserable work situation is taking on your psyche. How hard is it to get out of bed in the morning? If it’s really not that bad, you could try to stick it out. If you can’t stand it, and the mere thought of work gives you hives, its time to leave your job.

If you decide to hang on until you get that termination letter, prepare yourself for the moment. Seek counsel from friends or a career coach. Make the best possible transition you can. Dont be in denial and pretend it’s not happening. Youll be caught off guard when youre finally shown the exit, which is not the kind of situation you want to find yourself in.

Is it Better to Quit Before You Get Fired?

Which is better resignation or termination?

When you resign, your employer typically only pays for the work you do through the end of your last day on the job. If you’re terminated, your employer may have to pay your compensation or severance pay, which refers to the compensation to account for your job loss.

Why do people quit instead of getting fired?

Quitting can spare you the embarrassment and stigma that can often accompany a termination, although it can leave you without a source of income if you don’t have another job lined up. In some cases, your employer might also prefer that you quit instead of having to fire you.

What are the benefits of getting fired?

Employees terminated by an employer have certain rights. An employee has the right to receive a final paycheck and the option of continuing health insurance coverage, and may even be eligible for severance pay and unemployment compensation benefits.

Can I say I quit if I was fired?

It is not a legal designation. We have clients who have stopped a manager beginning to say “Therefore I regret to tell you that — ” in order to say “I quit!” They held off the termination announcement for the split second it took them to quit before they got fired. You can do the same thing in retrospect.